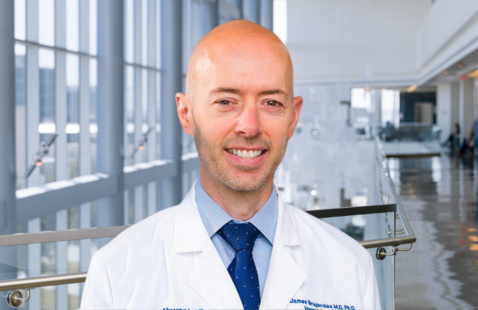 "Kidney Cancer: Bench to Bedside and Back"

James Brugarolas received his medical degree from the University of Navarra, Spain (1993), and his Ph.D. from the Massachusetts Institute of Technology (1998). He trained in Internal Medicine at Duke University Medical Center and completed a fellowship in Oncology at a combined program of the Dana-Farber Cancer Institute, Brigham and Women’s Hospital, and Massachusetts General Hospital. He was an instructor at Harvard Medical School in the laboratory of Nobel Laureate William G. Kaelin, M.D. until 2006, when he was recruited by UT Southwestern Medical Center.

Upon his arrival, he established a research laboratory that became a cornerstone of the Kidney Cancer Program (KCP). Discoveries from the laboratory led to the identification of kidney cancer causing genes, established the foundation for a molecularly-based classification, enabled mouse models reproducing the human disease, established HIF-2 as a core dependency, identified drivers of tumor grade, and provided a biological explanation for elusive prognostic factors.

In 2016, the KCP became the second program in the U.S. to receive a Specialized Program of Research Excellence (SPORE) award from the National Cancer Institute for kidney cancer. Recognized for its patient care with a Leaders in Clinical Excellence Program Award and for its innovation with a finalist Healthcare Innovation Award by D CEO & Dallas Innovates, the KCP is driving advances in patient care as exemplified by the development of a first-in-class drug going from gene discovery to FDA approval, and of novel radiation applications.

Dr. Brugarolas is a member of the Renal Task Force of the Genitourinary Steering Committee of the National Cancer Institute, and an elected member of the American Society for Clinical Investigation. He has received numerous awards including a V Scholar Award (V Foundation), a Research Scholar Award (American Cancer Society), and a Claudia Adams Barr Award for Innovative Cancer Research (Dana-Farber Cancer Institute, Harvard Medical School). He has served on advisory boards of kidney cancer and SPORE programs at several NCI-designated cancer centers and on study sections and ad hoc review panels of the National Cancer Institute, the American Cancer Society, and the U.S. Army Medical Research Command.